From Heraldry of the World
Your site history : Darwin College (Cambridge University)
Jump to navigation Jump to search 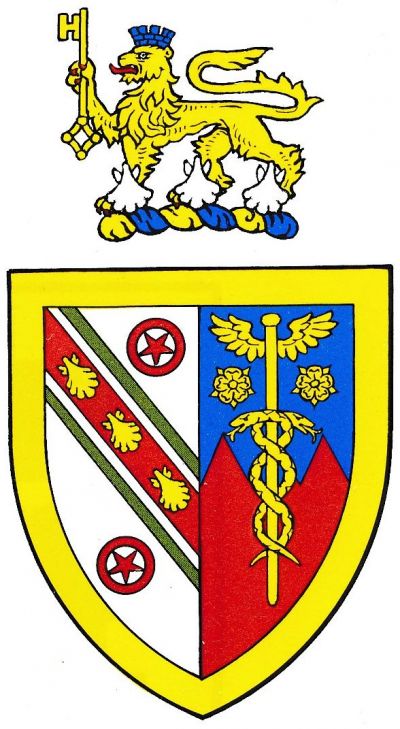 Arms: Argent, on a bend gules cottised vert between two mullets each within an annulet gules three escallops or (for Darwin) impaling Per fess dancetty azure and gules, a caduceus between in chief two roses Or (for Rayne); all within a bordure Or.
Crest: On a wreath Or and azure, In front of a lion passant Or, murally crowned azure, holding in the dexter forepaw a key erect, wards outwards, Or three escallops argent

The arms were officially granted on January 5, 1966.

Darwin College was founded in 1964 by a trust consisting of members of Gonville and Caius, St John's, and Trinity Colleges. The first graduate college established in modern times, it was formed to meet the rapid expansion in the number of research students and University teaching officers for whom the existing colleges could not make adequate provision. In January 1965, following adjustment of the University statutes to include graduate colleges, Darwin became an Approved Foundation in the University, and in 1976 a full college.

The armorial bearings commemorate the principal benefactors of the foundation - the Darwin family and Sir Max Rayne. On the death of Sir Charles Galton Darwin, K.B.E., F.R.S., in 1962, his widow and remaining family decided to vacate their Cambridge home, Newnham Grange, and agreed that it should be acquired for the projected graduate college, and that this should bear the name 'Darwin'. Sir Charles's brother, Mr Reginald Darwin, and other members of the family became liberal benefactors of the college. In addition, the Max Rayne Foundation provided the college with a large endowment, while Sir Max Rayne made a generous personal contribution.

Ther arms of the college thus show the coats of Darwin and Rayne joined by impalement within a border - an arrangement like that already used in the case of Gonville and Caius College. The arms of Darwin were granted in 1890 to Reginald Darwin of Fern, Derbyshire, being the great­ grandfather of Sir Charles Darwin of Newnham Grange. The arms of Sir Max Rayne were granted in 1963.