From Heraldry of the World
Your site history : David Leon Toups
Jump to navigation Jump to search 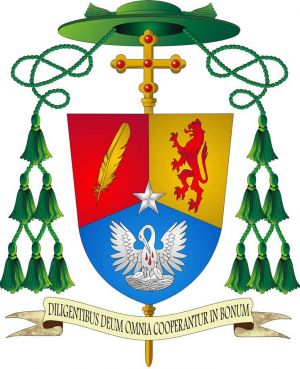 The feather fashioned into a quill, a symbol which appears in a 16th-century coat of arms of the Toups (Dubs) family, serves as a reminder of his family lineage. In addition, Bishop Toups spent much of his priesthood in the service of Catholic education as a pastor, professor, administrator, and rector of the major seminary in Florida. The plume/quill represents the importance of the intellectual pursuit of the truth and his desire to be a Shepherd faithful and true. Also, his inspiration comes from the witness St. Teresa of Calcutta who often said that she was simply “I am only a pencil in the hand of God, but it is He who writes.”

The red rampant lion, which comes from the arms of the Diocese of Saint Petersburg, for which the bishop was ordained a priest in 1997, represents the Spanish roots of the church in Florida. In addition, this symbol underlines the middle name of the Bishop, Leon, after his father, thus making the arms canting. The lion is also a symbol of courage, which the Bishop asks of God to pour upon him as he embraces the Office of Bishop.

The image of the pelican feeding its chicks is taken from the 13th-century hymn “Adoro te devote” attributed to St. Thomas Aquinas, and is a powerful and ancient symbol of Jesus, our Eucharistic Lord, Who, to prevent us from starving, feeds us with his very Flesh and Blood. Thus, this image serves as the base/foundation of the entire shield to remind all that the Eucharist is the “source and summit” of our lives as Catholic Christians. It is also the primary symbol on the flag of the State of Louisiana, where the bishop spent the majority of this youth. The three chicks represent the bishop and his brother and sister who were spiritually and temporally fed by their loving parents. It stands as an image of a life of self-sacrifice, which he desires to live for the people of God;

The five pointed star at the center symbolizes Mary as the Star of the New Evangelization (per St. John Paul II) as the Bishop seeks her intercession for his episcopal ministry. The star is cited by St. Bernard of Clairvaux in a famous hymn, where he refers to Mary as the “Star of the Sea,” which guided mariners to safety. Bishop Toups continues to entrust his new pastoral service to the protection and the guiding light of the Blessed Virgin Mary. In addition, the star is a prominent symbol of his new home in Texas, “the Lone Star State.”

The Trinity is beautifully represented in each of the three sections of his coat of arms: God the Father is represented by the lion as the King of all creation; God the Son, Jesus Christ, is represented by the sacrificial pelican feeding its chicks with its own flesh and blood; and God the Holy Spirit is represented by the plume/feather as the Spirit is often mentioned appearing in the form of a Dove; and, at the very center, the Heart of the Trinity, dwells the Blessed Mother of Jesus, Mary Immaculate, in the symbol of the star, as she intercedes for all of her children to come to know the Love of God.

For his episcopal motto Bishop Toups has chosen these words taken from the eighth chapter of St. Paul’s Letter to Romans. This Letter, probably the most important of the epistles of Paul, is a kind of theological heritage and clearly declares that salvation is offered to all humanity through the Gospel. Inspired by the Apostle’s example, Bishop Toups desires to dedicate himself to spreading the Gospel to all people. It is also the first scripture he was taught as a child and was a type of family motto that his mother used as a way to keep the family grounded in trusting God’s providence for their lives. Moreover, the choice of this motto is the same verse as his predecessor, Bishop Curtis John Guillory.