From Heraldry of the World
Your site history : Dean of Guild Court of the Burgh of the City of Glasgow
Jump to navigation Jump to search 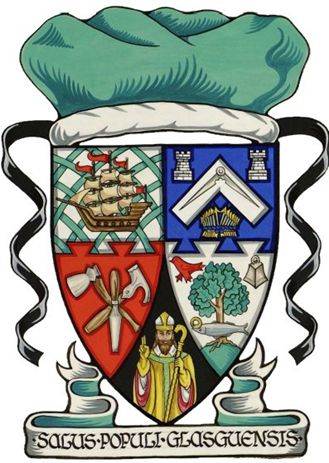 Quarterly of five: 1st: Argent, fretty enarched Vert, a full-rigged ship in full sail Proper, flagged Gules. 2nd. Azure on a chevron couped between two towers in chief Argent, masoned Sable and in base fourteen arrows Or bound of the first, a pair of compasses Proper. 3rd. Gules an ancient Scots nail-hammer and axe in saltire surmounted of a wright's chisel, edge downwards, paleways, all Proper. 4th: Argent on a mount in base Vert an oak tree Proper the stem at the base thereof surmounted of a salmon on its back also Proper with an annulet in its mouth Or, in dexter chief a martlet Gules, in the sinister chief an ancient handbell Proper, 5th entee en point Sable a demi-figure representing St Mungo issuant from the base, vested and mitred, his right hand raised in the act of benediction and having in his left hand a crosier all Proper.
Motto: Salus populi glasguensis

If you have any information on these arms of Guild Court of the Burgh of the City of Glasgow mail us !