From Heraldry of the World
Your site history : Destroyer USS Barry
Jump to navigation Jump to search 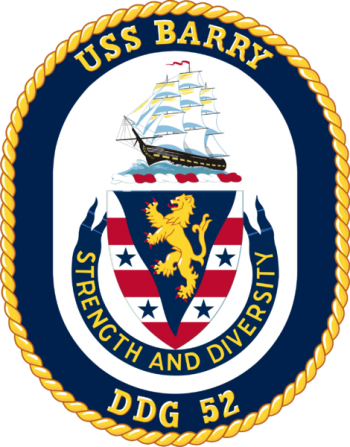 SHIELD: Barry of six Argent and Gules, a pile wavy Azure charged with a lion rampant Or armed and langued Gules, between, on the Argent bars in fess and base, four mullets Azure.

CREST: Issuing from a wreath of the colors (Argent and Gules), the frigate United States, Captain Barry’s last command, making headway at full sail, all Proper.

MOTTO: On a scroll Azure, the motto “STRENGTH AND DIVERSITY” in Gold letters.

SEAL: The complete coat of arms in full color as in the blazon upon a white oval background enclosed by a dark blue border with an outer edge of gold rope inscribed “USS BARRY” at top and “DDG 52” in base all in gold.

SHIELD: Red, white, and blue are our National colors. The field of bars, adapted from the Barry coat of arms, is a reference to Captain John Barry for whom the ship was named. The stars recall the four battle stars awarded to the second Barry in World War ll and represent all four ships to bear the name Barry. The wavy pile represents the US Navy fleet in which Captain Barry held the first commission. The lion symbolizes courage and strength. Gold stands for excellence ; red and white for courage and integrity. CREST: The frigate United States symbolizes the unbroken tradition of patriotism, valor, fidelity, and ability from our Navy‘s beginning to the present, and represents the maritime supremacy of our country. It also honors the heritage of the three previous ships to bear the name Barry. The stars and bars together symbolize the United States and refer further to Captain John Barry’s ship of that name. MOTTO: Strength is derived from the formidable power which USS Barry (DDG 52) will take to sea while Diversity refers to the ship’s multi-mission capability, a capability which extends to all naval warfare contingencies. The motto also represents the strength our Nation derives from its cultural diversity, as evidenced by the contribution of Captain Barry, an Irish Immigrant to the founding of our country.