From Heraldry of the World
Your site history : Destroyer USS Bulkeley
Jump to navigation Jump to search 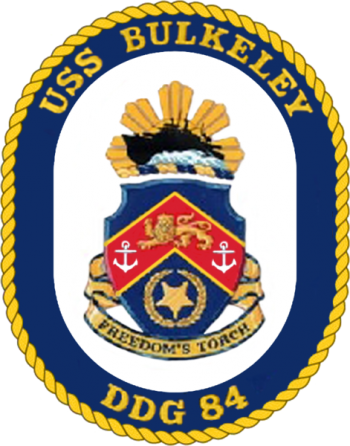 Shield: Azure, a chevron enhanced Gules fimbriated Or bearing a lion passant guardant of the like between two anchors Argent, in base a mullet reversed flory encircled by a wreath of laurel of the third.
Crest: Issuing from a wreath Or and Azure a stylized demi-sun Or, superimposed by a silhouette of a World War II PT boat Sable parting waves of the sea Proper.
Motto: A scroll Or fimbriated and inscribed “SECOND TO NONE” Azure.
Seal: The coat of arms as blazoned in full color upon a white oval enclosed by a dark blue collar edged on the outside with a gold rope and bearing the inscription “USS BULKELEY” at top and “DDG 84” in base all in gold.

The shield, reflecting the power of the Aegis Weapons System, is navy blue and gold, the colors traditionally associated with the U.S. Navy, and symbolizes the sea and excellence. The inverted star at the base of the shield recalls the Medal of Honor presented to Admiral Bulkeley by President Franklin Delano Roosevelt for his dynamic forcefulness and daring during the defense of the Philippines. The gold laurel wreath represents honor and high achievement, the hallmarks of USS Bulkeley. The red chevron, from the family coat of arms, is emblematic of the valor and sacrifice displayed by Admiral Bulkeley while leading a flotilla of PT boats and minesweepers along Utah Beach before assault troops stormed ashore at Normandy. The lion alludes to the heritage of Normandy and embodies courage and strength. Silver anchors flanking the lion reflect the devotion and commitment of U.S. Navy sailors defending freedom and keeping USS Bulkeley and the United States Navy “SECOND TO NONE.” Crest: A World War II PT boat surrounded by the Philippine sun serves to honor Admiral Bulkeley’s role in the Pacific including his daring rescue of General MacArthur and President Quezon of the Philippines from Corregidor.