From Heraldry of the World
Your site history : Destroyer USS Chung Hoon (DDG-93)
Jump to navigation Jump to search 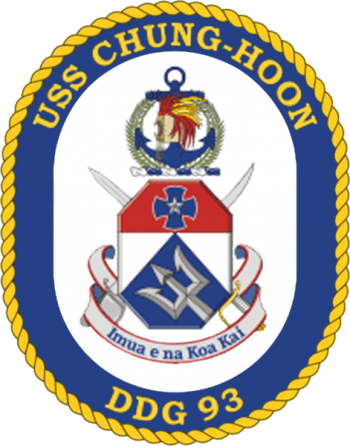 SHIELD: Per chevron Argent and Azure, in base a demi-trident bendwise issuing from sinister base Proper, on a chief Gules a cross patee convexed of the second fimbriated of the first charged with a mullet of the like.

CREST: From a wreath Argent and Azure a palm wreath Proper superimposed by an anchor of the second, overall a stylized Hawaiian warrior helmet Proper garnished Gules and Or.

SUPPORTERS: A United States Naval sword and a cutlass saltirewise points up Proper.

SEAL: The coat of arms as blazoned in full color upon a white oval enclosed by a dark blue collar edged on the outside with a gold rope and bearing the inscription “USS CHUNG-HOON” at top and “DDG 93” in base all in gold.

SHIELD: Dark blue and gold are colors traditionally used by the Navy and recall the sea and excellence. Red is the color of zeal, courage and sacrifice. The trident and three tines represent maritime dominance from the combination of air, surface and undersea warfare technologies into a single AEGIS platform. The octagon shield shape alludes to the AEGIS configuration on a DDG. The ship’s namesake honors Navy Rear Admiral Gordon P. Chung-Hoon, recipient of the Navy Cross and Silver Star, for his conspicuous gallantry and extraordinary heroism as Commanding Officer of the Sigsbee, DD 502. He valiantly kept his antiaircraft batteries delivering effective fire in the face of catastrophic damage by a Kamikaze. CREST: The Hawaiian warrior helmet refers to Hawaii, Rear Admiral Chung-Hoon’s birthplace, and emphasizes the fighting spirit. The anchor commemorates his distinguished Navy career. The palm wreath symbolizes victory and the triumph of the human spirit.