From Heraldry of the World
Your site history : Destroyer USS Forrest Sherman (DDG-98)
Jump to navigation Jump to search 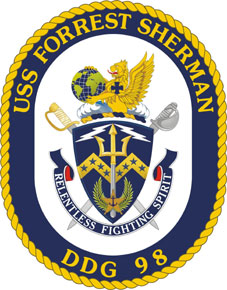 Shield: Azure (Dark blue), two chevrons conjoined Or, each charged with four mullets of the first, surmounted by a trident throughout Proper, radiating from the middle two lightning flashes chevronwise Argent in base two palm fronds Vert superimposed by a Bronze mullet, the points guarded all of the last charged with an anchor Purpure.
Crest: Issuant from a wreath Or and Azure (Dark blue),a seal lion of the first langued Gules, charged with a cross patee of the second, holding a terrestial globe grid lined Argent, between two ocean waves, all Proper.
Motto: A scroll Azure (Dark blue) doubled Gules and edged Argent insrcibed RELENTLESS FIGHTING SPIRIT, of the last.


The Coat of Arms as blazoned in full color on a White field enclosed by a Blue oval border edged on the outside with Gold rope and bearing the name USS FORREST SHERMAN at top and DDG 98 in base all in Gold.