From Heraldry of the World
Your site history : Destroyer USS Hewitt (DD-966)
Jump to navigation Jump to search 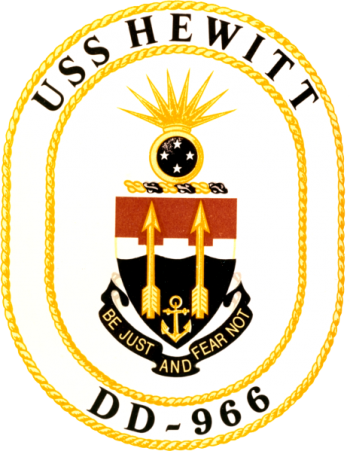 The Arrows represents naval gunfire support given at the Landings in Sicily and Salerno in World War II by Admiral Hewitt's Eighth Fleet. The Anchor symbolises the Navy, to which Hewitt dedicated much of his life. The Bombshell in the Crest denotes Naval Gunnery and Gunfire Support of troops ashore. The four stars represents the rank of Admiral, ahcived by Hewitt during World War II.