From Heraldry of the World
Your site history : Destroyer USS Lassen
Jump to navigation Jump to search 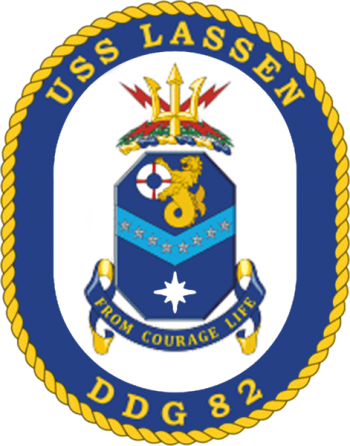 Shield: Azure (Dark blue), a chevron reversed Celeste, charged with eight mullets Argent between in chief a sea lion Or grasping a life ring Proper and in base a compass rose Argent.
Crest: From a wreath Or and Azure (Dark blue), two palm fronds Vert superimposed by two lightning flashes saltirewise Gules and overall a demi-trident Or.
Motto: FROM COURAGE LIFE.
Seal: The coat of arms as blazoned in full color on a white oval enclosed by a dark blue border edged on the outer side with a gold rope and inscribed “USS LASSEN” above and “DDG 82” below in gold.

Dark blue and gold are the colors traditionally used by the Navy. The Aegis shield highlights the modern weaponry of the USS Lassen. The blue chevron recalls Lt. Lassen’s service in the coastal campaign during the Vietnam War. It also simulates the prow of the ship, alluding to the mission as an ammunition ship, which rearmed many of the major fleets. The heraldic sea lion symbolizes strength and courage, demonstrated by Lt. Lassen. The chevron suggests the Medal of Honor awarded for Lt. Lassen’s heroism, above and beyond the call of duty, for the rescue of two aviators. The compass rose symbolizes the landing lights of his helicopter, while rescuing the aviators, revealing his position to the enemy, when illumination was lost.

The palm fronds suggest the first Lassen’s area of operations in the Pacific; the flashes symbolize striking capabilities and refer to the first Lassen’s service in World War II, rearming many of the major fleets. The trident’s three tines represent battlestars earned during World War II in the Pacific as well as denoting the multifaceted offensive/defensive armament of the present DDG-82.