From Heraldry of the World
Your site history : Destroyer USS McCampbell
Jump to navigation Jump to search 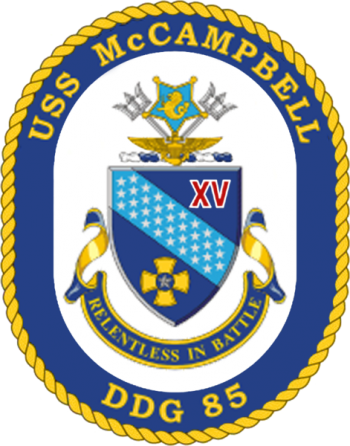 Shield: Azure, a bend Celeste spattered with thirty-four mullets Argent between the Roman numeral “XV” Gules fimbriated of the third and a cross patee Or charged with a hurt bearing a mullet White.
Crest: From a wreath Argent and Azure, two tridents chevronwise reversed of the first superimposed by a mullet reversed flory Or voided Celeste bearing a sea lion grasping a sword of the third, in base the shield of the coat of arms of the United States winged and anchored of the like.
Motto: A scroll Azure doubled and inscribed “RELENTLESS IN BATTLE” Or.
Seal: The arms as blazoned in full color upon a white oval enclosed by a Dark blue collar edged on the outside with a gold rope and bearing the inscription “USS MCCAMPBELL” at top and “DDG 85” at base all in gold.

Dark blue and gold are the colors traditionally used by the Navy and represent the sea and excellence. The light blue bend reflects the Pacific theater, where Captain McCampbell served as commander of Air Group 15. The “Fabled Fifteen”, based on the USS ESSEX, is symbolized by the Roman numeral “XV”. The thirty-four stars allude to the number of enemy aircraft destroyed by Captain McCampbell in air to air combat, distinguishing him as the leading Navy ace of World War II. The star and cross highlight the Navy Cross and Silver Star awarded to Captain McCampbell, for his gallantry and bravery during combat in the Philippines.

The tridents, symbolizing sea prowess, allude to the firepower and the multiple strike capabilities of the Aegis system. The reversed star denotes the Medal of Honor awarded to Captain McCampbell for heroism, in the First and Second battles of the Philippine Sea. The sea lion is adapted from the government seal of the Republic of the Philippines. The winged shield of the coat of arms of the United States represents naval aviator’s wings and Captain McCampbell’s military