From Heraldry of the World
Your site history : Destroyer USS Momsen (DDG-92)
Jump to navigation Jump to search 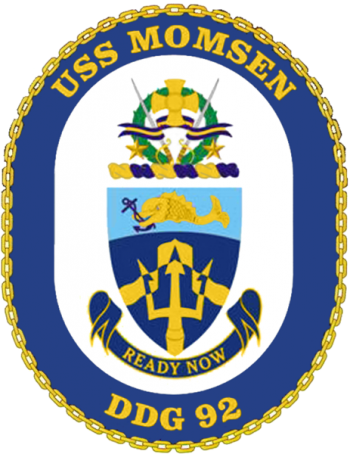 Shield:Azure (Dark Blue) a wavy chevron rompu surmounted by a demi-trident issuing from base Or counterchanged of the field; on a chief arched Celeste a dolphin naiant Or grasping in its mouth a fouled anchor of the first.
Crest: On a wreath Or and Azure (Dark Blue) in front of a laurel wreath two officer’s swords, hilts to base chevron-wise reversed Proper between two mullets of the first and intertwining a riband of the second garnished of one stripe Or and doubled Gules, all superimposed by a stylized Naval Cross of the first.
Motto: A scroll Azure doubled and inscribed "READY NOW” Or.
Seal: The coat of arms in full color as in the blazon, all upon a white background and enclosed within a dark blue ova border edged on the outside with a gold chain and bearing the inscription “USS MOMSEN” at top and “DDG 92” in base all gold.

Gold and Dark Blue represent the Navy; Celeste (Light Blue) symbolizes worldwide capability. The wavy chevron rompu signifies the Momsen’s mission of support to Navy and Marine Corps convoys and amphibious forces. The upper portion of the chevron is freed and rising from the main body to represent the Momsen Bell and Momsen Lung devices conceived and developed by Vice Admiral Momsen to save trapped mariners from damaged and sunken submarines. The demi-trident symbolizes advanced weaponry and sea power and its times recall the attack pattern employed by Vice Admiral Momsen against convoys of Japanese shipping during World War II. The dolphin, traditional friend of the sailor, denotes ocean going skills and expertise and refers to the life-saving operations in which the Vice-Admiral was engaged for much of his Naval career. The anchor represents the individual sailor.

The stylized Navy Cross refers to that awarded to Vice Admiral Momsen for his heroism as Commander of an attack group of submarines against Japan’s forces in the East China Sea during World War II. The blue and gold riband recalls the Distinguished Service Medal he received among many awards for his wartime service; the two gold stars refer to the Legion of Merit. The swords denote readiness and ability to fight. Together, in the form of the letter “V”, they represent the Vice Admiral’s Combat Awards. The wreath, symbol of honor and achievement, recalls the many and various decorations made to him during his distinguished career. The scarlet doubling on the riband symbolizes courage and sacrifice and refers to Navy support to Marine Corps forces. Gold denotes excellence.