From Heraldry of the World
Your site history : Destroyer USS Mustin
Jump to navigation Jump to search 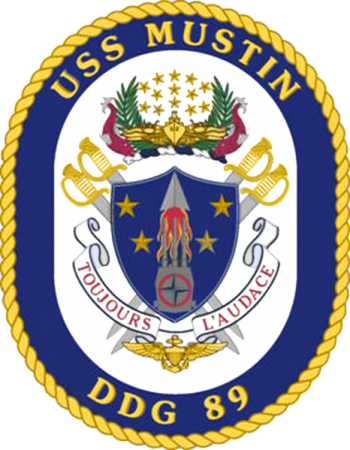 Shield: Azure (Dark Blue), a delta Argent (Silver Gray) enflamed Proper surmounted by a stylized battleship gun turret of the second superimposed by an annulet Gules, bearing a polestar Azure, between four mullets, two and two, Or.
Crest: From a wreath Argent and Azure (Dark Blue), two palm fronds Vert overall the Surface Warfare Officer device Proper flanked by two dolphins urinant embowed respectant Gules, all below three arcs of thirteen mullets, five, five and two Or.
Motto: A scroll Argent edged Azure inscribed ‘TOUJOURS, L’AUDACE’ Gules.
Supporters: The Naval Aviator device Proper between four United States Naval Officer’s swords, two and two, saltirewise points down Proper.
Seal: The coat of arms in full color as in the blazon all upon a white background and enclosed within a dark blue oval border edged on the outside with gold rope and bearing the name “USS MUSTIN” at top and “DDG 89” in base in gold letters.

SHIELD: Dark blue and gold are the colors traditionally used by the Navy and represent the sea and excellence. The enflamed delta symbolizes the diverse missile capabilities of the destroyer and the advent of the Tomahawk weapons system aboard surface combatants spearheaded by VADM Henry C. Mustin. The five points of flame represent the five wars where Mustin family members fought. The triple-barreled battleship gun turret highlights VADM Lloyd M. Mustin’s (1911-1999) renowned gunnery expertise throughout his career; his remarkable experiences during the naval battle of Guadalcanal aboard the cruiser ATLANTA; and, after her sinking, service with the First Marine division on Guadalcanal. The barrels of the gun turret also reflect the three generations of the Mustin Family who faced combat under fire. The red annulet denotes unity, courage and valor. The polestar honors VADM Henry C. Mustin, a decorated Vietnam veteran, who became the commander of NATO’s largest fleet and Deputy Chief of Naval Operations during the 1980’s. The combination of the annulet and polestar symbolizes the early gunsight developed by CAPT Henry C. Mustin (1874-1923) and the lead computing anti-aircraft gunsight developed by VADM Lloyd M. Mustin, a key to the United States’ success in anti-aircraft action in the Pacific during World War II. The four stars commemorate the Bronze Stars awarded to the Mustin Family for service in Vietnam – three for VADM Henry C. Mustin and one for LCDR Thomas M. Mustin, Officer in Charge of Patrol Boat River Section 511, Mekong Delta; combined with the polestar in the “V-shape” symbolize the Bronze Stars with Combat awarded to the Mustin Family for service Vietnam.

CREST: The palm fronds represent achievement and victory, during the campaigns in the Pacific. The thirteen stars commemorate the thirteen battle stars on the Asiatic-Pacific Area Service Ribbon earned by the first USS MUSTIN (DD 413) for her contributions to major operations in the Pacific throughout World War II. The dolphins symbolize search and rescue, also alludes to the first Mustin rescue of 337 crewmen of the HORNET, as they abandoned ship after being torpedoed. The Surface Warfare Officer device reflects the sea service of the Mustin Family and the Surface Warfare excellence of the two destroyers.

SUPPORTERS: The Naval Aviator “Wings of Gold” device honors Captain Henry C. Mustin, designated Naval Aviator Number Eleven, and instrumental in the design of these wings. Captain Mustin was the principal architect of the catapult launch concept; made the first catapult launch of an aircraft from a ship underway; and at Veracruz in 1914, commanded the first United States military aviation unit ever to fly against hostile fire. The four crossed Naval Officer’s swords symbolize the commissioned service of each of the Mustin’s honored in the naming and commissioning of USS MUSTIN (DDG 89).