From Heraldry of the World
Your site history : Destroyer USS O'Kane
Jump to navigation Jump to search 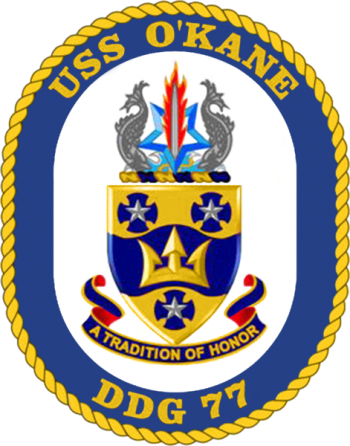 Shield: Or, on a fess wavy Azure between three crosses paty convex of the like bearing a mullet Argent, a trident head of the first.
Crest: From a wreath Or and Azure the waves of the sea Proper, superimposed by a mullet voided one point down of the second enfiled by a demi-Naval sword enflamed Proper between two dolphins embowed urinant Argent.
Motto: A scroll Azure doubled Gules fimbriated and inscribed "A TRADITION OF HONOR" Or.
Seal: The coat of arms in full color as in the blazon, upon a white background enclosed within a dark blue oval border edged on the outside with a gold rope and bearing the inscription "USS O'KANE" at top and "DDG 77" in base all gold.

SHIELD: Dark blue and gold represent the sea and excellence and are the colors traditionally used by the Navy. The trident, symbol of naval power, underscores USS O'KANE's awesome combat and weapons systems, which allows the ship to dominate the battle space in multi-threat environments. The stylized crosses and stars commemorate the three Navy Crosses and three Silver Stars awarded to Rear Admiral O'Kane for brilliant tactical ability and heroism displayed during war patrols as Executive Officer of USS WAHOO and Commanding Officer of USS TANG.

CREST: The dolphins pay tribute to Rear Admiral O'Kane as a submariner. The reversed star represents the Medal of Honor awarded to O'Kane for his extraordinary actions during his last war patrol. Operating independently in enemy-controlled waters, O'Kane decimated two large and heavily protected convoys before TANG went down. The flaming Naval sword rising from the waves highlights the aggressive naval combat action displayed by O'Kane and his crews on every patrol. Red is emblematic of valor and sacrifice, underscoring Rear Admiral O'Kane's time as a prisoner of war.