From Heraldry of the World
Your site history : Destroyer USS Oscar Austin
Jump to navigation Jump to search 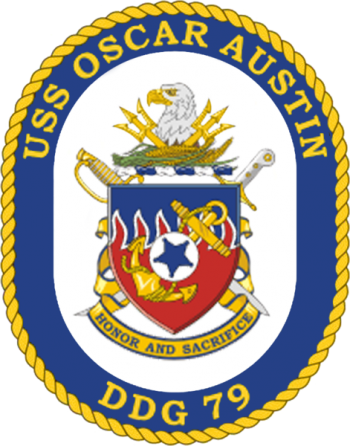 Shield: Gules, a chief rayonne Azure fimbriated Argent and overall an anchor fouled bend sinisterwise Or superimposed by a plate bearing a mullet reversed flory Celeste.
Crest: From a wreath Argent and Azure an eagle’s head Proper superimposed by two stalks of rice fesswise Proper, and two demi-trident saltirewise Or.
Motto: A scroll Or fimbriated and inscribed “HONOR AND SACRIFICE” Azure.
Supporters: A United States Navy Officer’s sword and Marine mameluke saltirewise points down Proper.
Seal: The coat of arms as blazoned in full color upon a white oval enclosed by a dark blue collar edged on the outside with a gold rope and bearing the inscription “USS OSCAR AUSTIN” at top and “DDG 79” in base all in gold.

Dark blue and gold are the traditional colors associated with the Navy; red is emblematic of valor and sacrifice and white stands for integrity and purity of purpose. The reversed star refers to the Medal of Honor posthumously awarded to Private First Class Oscar P. Austin, United States Marine Corps, for his self-sacrifice and extraordinary heroism when he threw himself between an enemy grenade and an injured Marine and was mortally wounded by an enemy who was about to shoot his fallen comrade. The white of the globe and medium blue of the star are the colors of the ribbon of the Medal of Honor; the reversed star is the silhouette of its pendant. The white globe and anchor, suggesting the United States Marine Corps seal, represent the Navy’s global mission. The flames allude to the fire-swept terrain and the enemy fire where PFC Austin gave his life to assist his wounded comrades. The tridents, symbols of sea prowess, represent DDG 79’s modern warfare capabilities: the Aegis Weapons and Vertical Launch Systems. Each tine on the trident depicts separate warfare areas: air, surface and sub-surface. The two are crossed to denote multiple capabilities. The rice stalks suggest Vietnam where PFC Oscar P. Austin served; the eagle, our National emblem, symbolizes the freedom and principles for which PFC Austin gave his life. The crossed Navy sword and Marine Mameluke represent cooperation and strength. The Mameluke commemorates PFC Oscar P. Austin’s service with the Marine Corps.