From Heraldry of the World
Your site history : Destroyer USS Roosevelt
Jump to navigation Jump to search 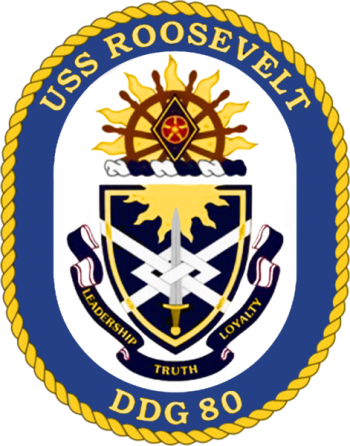 Shield: Azure, a fret Argent, a demi-sun in glory issuing from chief Or, interlacing the fret a sword throughout Proper, an orle of the third.
Crest: From a wreath Argent and Azure a demi-sun in glory Or superimposed by a demi-ship’s wheel Proper surmounted by a lozenge of the second garnished Or charged with a rose Gules.
Motto: On a scroll Azure doubled Argent garnished Gules the motto “LEADERSHIP TRUTH LOYALTY” in gold letters.
Seal: The coat of arms in full color, as in the blazon, upon a white oval, within a dark blue border edged with gold rope on the outside and inscribed “USS ROOSEVELT” at the top and “DDG 80” at the bottom, all in gold.

SHIELD: Blue and gold represent the Navy. President Roosevelt’s leadership skills in bringing stability and strength to American society during the crises of the Depression and the threat of fascist aggression are symbolized by the fret. His calls to Americans for preparedness and confidence and his resolve during World War II are denoted by the sword, which indicates also DDG 80’s readiness to deploy her modern weaponry in defense of the country. The demi-sun signifies truth and the aspirations for a better world which President Roosevelt encouraged Americans to share with him. The orle signifies the unity he brought to the country and the all-encompassing areas of responsibility of his office which he administered so ably. White represents integrity and loyalty, gold denotes excellence.

CREST: The demi-burst signifies the splendid achievement of Franklin D. Roosevelt’s Presidency, to bring the United States out of domestic crisis and through world-wide conflict. The ship’s wheel recalls his appointment in 1913 as Assistant Secretary of the Navy. It denotes also his success in guiding America through the difficult years of his Presidential terms. The lozenge, traditionally a feminine heraldic symbol, is a reference to his wife, Eleanor Roosevelt, who assisted him politically and became a force in her own right. The sides of the lozenge represent his four elections to the Presidency. The rose, state flower of New York, recalls his governorship of that state and is a canting reference to his family name. Scarlet denotes courage and sacrifice, gold indicates excellence.

Literature: Information from The Institute of Herladry, US Army.