From Heraldry of the World
Your site history : Destroyer USS Shoup
Jump to navigation Jump to search 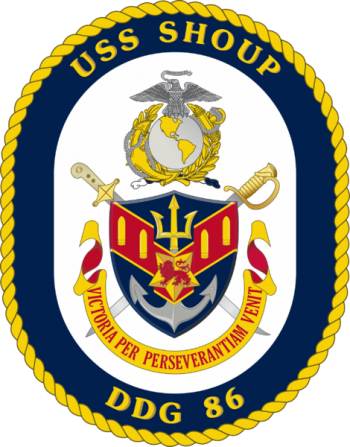 Shield: Azure (Dark blue) an anchor Argent combined with a trident head Or, debruised by a chevron rompu reversed Gules fimbriated of the third, charged with four artillery shells of the like and surmounted by a mullet reversed of the last bearing a lion passant guardant Gules.
Crest: From a wreath Argent and Azure (Dark blue), a wreath of laurel Or surmounted by a stylized Marine Corp emblem Argent and Or.
Motto: A scroll Or doubled and inscribed “VICTORIA PER PERSEVERANTIAM VENIT” Gules.
Supporters: A Marine Mameluke and a United States Naval Officer’s sword saltirewise, point down Proper.
Seal: The coat of arms as blazoned in full color upon a white oval enclosed by a dark blue collar edged on the outside with a gold rope and bearing the inscription “USS SHOUP” at top and “DDG 86” in base all in gold.

SHIELD: Dark blue and gold are the colors traditionally used by the Navy and represent the sea and excellence. The combined anchor and trident, symbols of sea prowess, exemplify and are symbolic of hope and steadfastness to our past naval history and its evolvement into a more modern warfare platform indicative of DDG 86’s Aegis and Vertical Launch Systems. Each tine on the trident depicts separate warfare areas: air, surface and sub-surface in addition to the shaft, signifying the emerging Land Attack capability in shaping the deep battle. The red chevron rompu symbolizes valor and sacrifice and suggests the troops, led fearlessly and gallantly by Colonel Shoup crossing the reefs of Betio; artillery shells denote the withering barrage of enemy fire. The red lion embodies courage and strength, and symbolizes the British Distinguished Service Order Awarded to Colonel Shoup for service during the battle at Betio. The gold reversed star recalls the Medal of Honor awarded to Colonel Shoup for his daring actions while commander of the Second Marine, 2d Marine Division at Betio and a bitterly contested island of Tarawa Atoll.

CREST: The laurel represents achievement and honor. The Marine Corp emblem highlight leadership and guidance reflecting Commandant Shoup’s war service during World War II and throughout his career culminating as Commandant of the Marine Corps.

Literature: Information from The Institute of Heraldry, US Army.