From Heraldry of the World
Your site history : Diocese of Alaska
Jump to navigation Jump to search 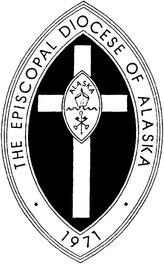 Sable a latin cross couped argent, surtout on the crossing a cartouche or, a mitre with infulae gules.

Based on the Seal. Alaska was formed as a Missionary district in 1895, and become a Diocese in 1971.