From Heraldry of the World
Your site history : Diocese of Allentown
Jump to navigation Jump to search 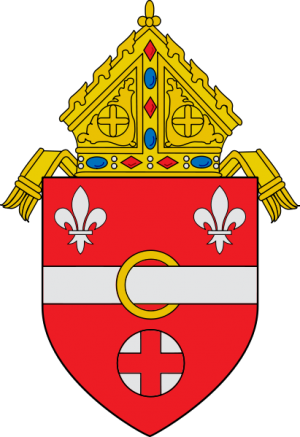 Gules, a barrulet argent encircled at fess point by a ring or between two fleurs-de-lis argent in chief and a cross gules on a plate in base.

The red background recalls the ardent devotion to the Church of Saint-Catharine of Siena, the patron saint of the cathedral of Allentown, which led to the return of Pope Gregory XI from Avignon to Rome.

The golden ring encircling the silver barrulet is a representation of the ring, given to Sanit-Catharine by Our Lord during an apparation, signifying her mystical marriage to Christ.

The two silver lilies come from the arms of Pope John XXIII. On the arms of this pope the lilies signified the Blessed Virgin Mary and Saint-Joseph.

The silver roundel (plate) bearing a red cross, is pars pro toto for three such roundels in the c.o.a. of the Archdiocese of Philadelphia, commemorating that the archepiscopal See, gave the counties Berks, Carbon, Lehigh, Northampton and Schuylkill to form the territory of the new diocese of Allentown. These roundels in their turn were from the arms of the Penn-family, the proprietors of the Province of the Pennsylvania Colony, who in 1733, authorized the first legal public Catholic Mass in the British Empire since the Reformation.