Diocese of Bath and Wells

From Heraldry of the World
Your site history : Diocese of Bath and Wells
Jump to navigation Jump to search

DIOCESE OF BATH AND WELLS 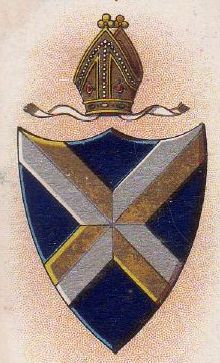 Azure, a saltire per saltire quarterly counterchanged Or and argent.

These arms are those of Wells alone, being a variation of the cross of St. Andrew to whom the cathedral is dedicated.

Alternatively they may be derived from the arms attributed by the medieval heralds to the Kingdom of Mercia since Bath Abbey (for a time a cathedral church) was the descendant of a College founded by the Mercian King Offa.

The seal of Robert Burnell (1275-92) has on one side of the bishop's effigy the keys of St. Peter and on the other the saltire of St. Andrew. Bishop Montagu (1608-16) placed a saltire for Wells between the sword and keys of the Abbey of Bath. In so doing he appears to have partially followed the example of Bishop Beckington (1443-65) who bore these arms with the addition of a pastoral staff in pale behind the saltire. This coat appears frequently in Wells Cathedral.