From Heraldry of the World
Your site history : Diocese of Baton Rouge
Jump to navigation Jump to search 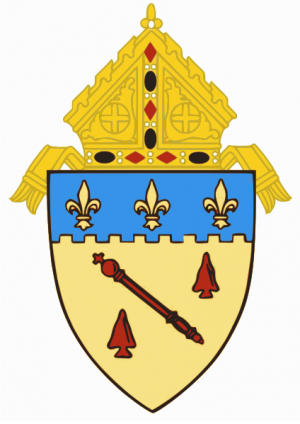 Or a sceptre in bend between two Indian arrowheads gueles; on a chief embattled azure three fleurs-de-lis or.

As the story goes, on a bluff overlooking the Missisippi River, a red pole was planted as a marker of the boundary between the territories of the Muskhogean and Choctaw tribes. The earliest explorers who were French, noted this and called the site ¨Bâton Rouge¨, which is French for Red Stick. In this design the two arrowheads are for the two Indian Tribes and the red sceptre is used to cant the name of the city. The red and yellow colors remind to area´s Spanish colonial heritage. The sceptre also signifies the royal status of Christ.

The embattled chief reflects the towers and upper structures of the Old State Capitol building located in Baton Rouge. The golden fleur-de-lis are taken from the arms of Baton Rouge´s Mother See, the Archdiocese of New Orleans. They may be also seen as honouring the Blessed Virgin Mary, her spouse Saint-Joseph (patron of the diocese and Cathedral of Baton Rouge) and the French heritage of the area: the lily flower is a common symbol both of the Mother of Christ and of Saint-Joseph, and the fleur-de-lis is traditional symbol of the pre-revolutionary French monarchy and nation.

Literature : an explanation of the coats of arms of the diocese on the diocesan website, 23-1-2004