From Heraldry of the World
Your site history : Diocese of Brooklyn
Jump to navigation Jump to search 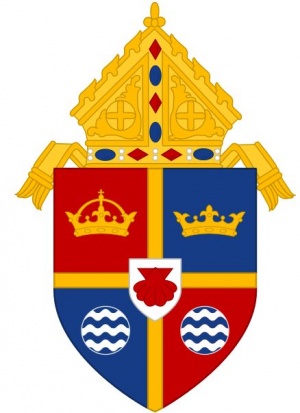 The Diocese of Brooklyn is one of the largest dioceses in Catholic population, but it is also by far the smallest in area. The Diocese includes only two counties, both of which are on the western end of Long Island, and both of which are currently part of the city of New York. Those counties are Kings (which is coterminous with the former city of Brooklyn) and Queens.

The two crowns on the diocesan arms thus have a dual meaning. First, the closed royal crown in the first quarter is the crown of a king, and thus suggests the name of Kings County. The coronet in the second quarter is more fitted for a consort, and thus suggests the name of Queens County. However, for Catholics, the terms “King” and “Queen” also bring to mind Christ the King, and the Blessed Virgin Mary, who is Queen of Heaven. This idea is emphasized by the two roundels found beneath the two crowns, because a roundel barry wavy argent and azure is called a fountain, and both Jesus and Mary are regarded by Catholics as founts of grace and mercy.

The inescutcheon with the scallop shell also has a double meaning. The first Catholic church built on Long Island was dedicated to St. James, and it eventually became the present cathedral of the Diocese of Brooklyn - and the symbol of St. James is the scallop shell. Furthermore, one of the original names for Long island in the language of the native Lenape-speaking people was Sewanhacky, which means “Land of seashells.”