From Heraldry of the World
Your site history : Diocese of Burlington
Jump to navigation Jump to search 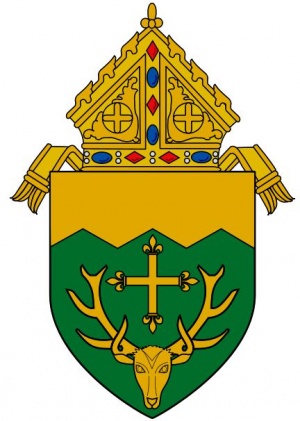 Vert, a stag's head caboshed, between the attires a cross fleur-de-lis or, a chief dancettée of the same.

The green field dancetty symbolizes the green mountain-peaks, thus honoring the Green State of Vermont, which is the diocese of Burlington.

Below the mountain is a golden stag´s head, taken from the arms of Lord Cavendish, Earl of Burlington, after whom the city of Burlingtpon is named. Between the antlers, as seen in the arms of the Archdiocese of Boston, is a golden cross fleuretty. This cross, honoring the French missionaries, who first brought the faith to the region, signifies that the first priest to be stationed in the service of the people of Vermont, father Jeremiah O´Callaghan, was sent by the Boston bishop Fenwick.