From Heraldry of the World
Your site history : Diocese of Central Gulf Coast
Jump to navigation Jump to search 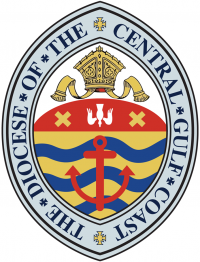 Barry wavy or and azure, an anchor in pale gules on a chief sable, a dove descendant argent between two saltires or.

The Waves symbolizes the Gulf of Mexico. The Anchor symbolizes Hope. When formed in 1971 it was considerated to name it the Diocese of the Holy Spirit. The Dove a Symbol of the Holy Spirit alluds to this. The Saltires alludes to the Flags of Alabama and Florida, the Two States in which the Diocese is located. It was desigend by Professor James Waring McGrady of the University of the South, Sewanee, Tennessee.