From Heraldry of the World
Your site history : Diocese of El Paso
Jump to navigation Jump to search 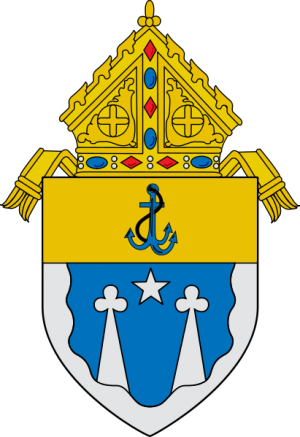 Azure, issuant from a border wavy two inverted piles, each surmounted by a trefoil below a star all argent; on a chief or, an anchor cable of the first.

The blue and argent of the main part honor the Blessed Virgin Mary, in her title of Immaculate Conception, Patroness of the USA. The blue field is a canting element for the first mission established at which is now El Paso, which was called ´Ysleta´ Spanish for ¨Little Island¨. The wavy border also represents the Rio Grande river, at which El Paso is a border city with Ciudad Juarez. Chihuahua, Mexico.

The two piles argent signify the two hills that form the ´pass¨ (El Paso) for which the city is named. Each of the piles is ornamented by a trefoil to honor the patron saint of the cathedral in El Paso, Saint Patrick (from Ireland, trefoils being a symbol for Ireland).

The star represents the Texas Lone Star as well as the North Star, because the city was formerly know as El Paso del Norte.

The anchor is -in changed colors- taken from the arms of pope St. Pius X, who established the diocese of El Paso in 1914.