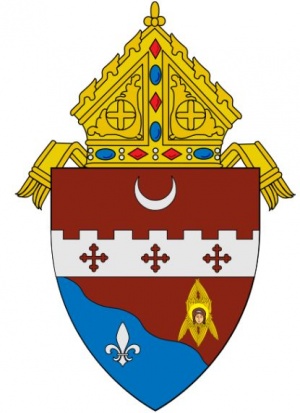 The upper half shows the original arms of the Diocese of Fort Wayne.
The crescent represents the Virgin Mary, mother of Christ, clothed with the sun with the moon under her feet. As the Immaculate Conception, she is the patroness of the diocese Fort-Wayne-South Bend and its cathedral in Fort Wayne.

The three crosses represent the Blessed Trinity. The Father sent the Son into the world; the Son sent the Spirit. It was the mission of Son and Spirit through missionaries that brought this diocese into being.

The crosses replace the swords on the family arms of General Anthony Wayne, the founder of the Fort that developed into the See city of Fort Wayne. The embattled line represent the fortified wall Fort Wayne.

The lower half represents South Bend.
The six-winged Seraph symbolizes the Inspired Word of God. Saint-Matthew is one of the evangelists who recorded this Word, the angel thus symbolises St. Matthew as the patron of the co-cathedral in South Bend.

Arms of Bishops of Fort Wayne