From Heraldry of the World
Your site history : Diocese of Georgia
Jump to navigation Jump to search 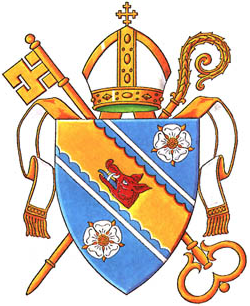 The Boar's head is from the Arms of General James Oglethorpe who bought the Church of England to Georgia. The Bend is from the Arms of the First Bishop of Georgia Rt.Rev. Stephen Elliott (1841-1866). The Roses alludes to the State Flower of Georgia the Cherokee Rose, thier numbers indicates the Episcopal Church Service during both the Union and Confederacy to Georgia.