From Heraldry of the World
Your site history : Diocese of Grand Island
Jump to navigation Jump to search 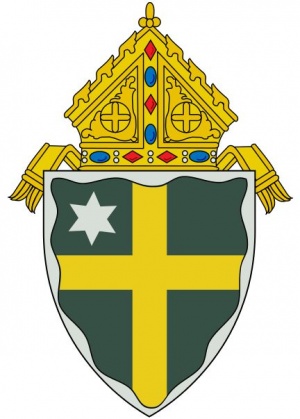 The main colors, green and gold, recall the fertile plains and fields of western Nebraska, while the cross, reaching to the edges of the heraldic field, recalls the Lord's commission to his Church, to make disciples of all the nations.

The Morning Star is a traditional symbol of Mary the Virgin, who is patroness of the diocese and of the Cathedral of the Nativity.

The silver border represents the Platte River, which borders the diocese for almost two hundred miles along its southern edge.