From Heraldry of the World
Your site history : Albert Gregory Meyer > Archdiocese of Milwaukee > Diocese of Grand Rapids
Jump to navigation Jump to search 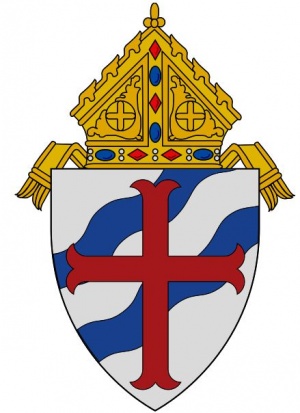 The arms are composed of a silver field on which are seen three wavy blue bends. In heraldry, this is a classic representation of falling water, as in rapids that would be found in a river. They represent the site of the rapids in the Grand River where, in 1833, missionary priest Frederick Baraga (later the first Bishop of the Diocese of Marquette) established the first permanent Catholic mission while the area was still a part of the Northwest Territory. From this missionary outpost at Grand Rapids, and traveling mostly by water, Bishop Baraga, his successor Bishop Ignatius Mrak and Father Andrew Viszosky (the first resident priest at Grand Rapids) established mission stations at Beaver Island, Grand Traverse, Cheboygan, Manistee, Muskegon, Grand Haven and Ionia.

The red cross moline, the arms of which suggest the wheat of the Holy Eucharist, the source and summit of the Christian community (moline comes from milling). While interpretations of the cross moline vary, it could be that this particular Cross symbolizes the mutual convergence of human society - thus adding to its Eucharistic meaning. “As this broken bread was scattered upon the hills, and was gathered together and made one, so let thy Church be gathered together into thy kingdom from the ends of the earth.” (Didache Apostolorum c.110 AD).

In the context of the Diocese of Grand Rapids, the shape of the Cross Moline also has an extended symbolic meaning, which is an “anchor” firmly set in the water. The anchor is an image of Jesus Christ, the security of the soul, and a sign of hope in troubled waters.