From Heraldry of the World
Your site history : Diocese of Greensburg
Jump to navigation Jump to search 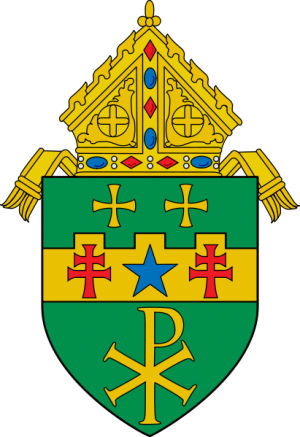 The green field is a canting element and is charged with an embattled fess, commemorating the Revolutionary War General Nathaniel Greene (1742-1786) after whom the city was named, and at the same time refers to the German word ´burg´, a fortified place, and thus represents the See city of Greensburg.

The blue fivepointed star is taken from the arms of the Archdiocese of Philadelphia, and commmorates bishop Hugh Lamb who was an auxiliary bishop of Philadelphia prior to becoming the first bishop of Greensburg. The red double traversed crosses are derived from the arms of the Bendictines, whose members have laboured for more than a century in what is now the Diocese of Greensburg.

The two golden crosses pateés in the upper part commemorate with their shapes that portion of the Diocese of Pittsburgh, that was in 1951 split to create the new diocese Greensburg.

The Chi-Rho symbolizes the Eucharisty, the dedicatory title of the Cathedral of Greensburg. Until 1987 this Chi-Rho was in red and placed on a host argent; after 1987 the Chi-Rho is placed in gold on the green field.

Literature : explanation on the arms of Mgr. Brandt, 4th bishop of Greensburg on the web of the Blessed Sacrament Cathedral of Greensburg, d.d. 22.6.2008; Hans van Heijningen