From Heraldry of the World
Your site history : Diocese of Jackson
Jump to navigation Jump to search 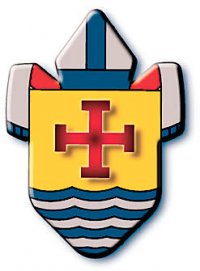 The arms are composed of a golden field on which is displayed a red cross potent, of The Faith. The cross is placed above a base that is composed of blue and silver alternating wavy bars that is the classic representation of water and is used here to signify the great importance of the Mississippi River to the region and the state of which Jackson is the state capital.

Arms of Apostolic Vicars of Mississippi

Arms of Bishops of Natchez

Arms of Bishops of Natchez-Jackson

Arms of Bishops of Jackson

Arms of Auxiliary Bishops of Jackson