From Heraldry of the World
Your site history : Diocese of Kalamazoo
Jump to navigation Jump to search 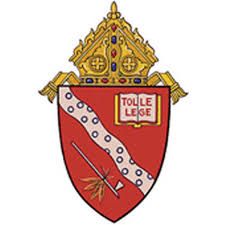 The red field refers to the Native Americans that live in this region that is now the diocese of Kalamazoo. The silver wavy bend represents the Kalamazoo River. The blue annulets semeés represent the English equivalent of the native American name ´Kalamazoo´= boiling pot, and is used to describe this river because of the bubbles of water.

The silver pipe with gold feathers, which was called a ´calumet´ by the French explorers that came to this region. A symbol of lasting and enduring peace it is an object of profound veneration in the Native American Culture because it is the supreme proof of hospitality, respecting the peace between parties that could not be broken without incurring the wrath of the gods. The Totality of Peace, that is Christ, signified by this symbol, comes to those who believe in him as the Redeemer of the world.

The book honours Saint Augustine, Bishop of Hippo, patron saint of the cathedral in Kalamazoo. The story is related that, as a repentant, Saint Augustine meditating on the Sacred Scriptures under a tree heard a little child say ¨Take and read¨(TOLLE LEGE), see also Romans 13:13. Considering that Saint-Augustine heard the voice of God, he took up the religious profession, to the the great joy of his mother, Saint-Monica, eventually becoming the bishop of Hippo in Northern Africa.