From Heraldry of the World
Your site history : Diocese of La Crosse
Jump to navigation Jump to search 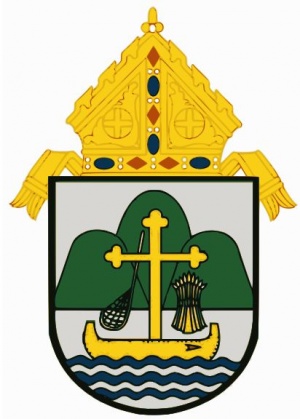 The three blue wavy lines represent the rivers that bound the diocese, Chippewa, Wisconsin, and Mississippi. The gold cross in the canoe symbolizes the evangelization of the early missionaries. The sheaf of wheat is symbolic of the Eucharist and the rural economy of the diocese.

Under the left arm of the cross is a lacrosse racket from the game played by the native Americans in this area. The shape is also symbolic of the bishop's crozier.

The green mounds in the background remind one of the natural beauty of the diocese.