Diocese of Lafayette in Indiana

From Heraldry of the World
Your site history : Diocese of Lafayette in Indiana
Jump to navigation Jump to search 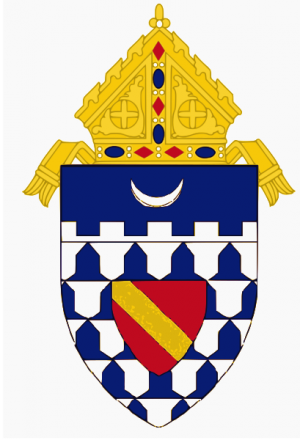 The crescent stands for the Blessed Virgin Mary under her title Immaculate Conception. She is the patron of the diocese and cathedral. The crenellated dividing line pays homage to Fort Ouiatenon, a French trading fort, once near the river Wabash, south of modern day-West Lafayette. There, as early as 1717 the catholicism came to what is now North-Central Indiana.

The vair with the red escutcheon with golden bend is the arms of Marquis de Lafayette, a French nobleman , who became general in the colonial army under General George Washington during the American Revolution. Lafayette was touring the USA in 1825, when the frontier town of Lafayette was planned and named in his honour. The use of the marquis personal arms thus identifies Lafayette, Indiana as the diocesan city.