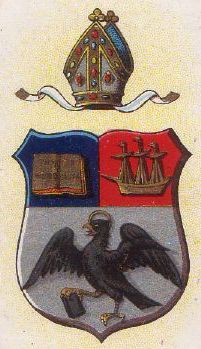 Argent, an eagle rising sable, beaked and legged and a glory round the head Or, holding in the dexter claw an inkhorn proper; a chief per pale azure and gules charged on the dexter side with an open book Or inscribed in letters sable "Thy Word is Truth" and on the sinister side an ancient ship with three masts, sails furled, also Or.

The Eagle of S. John the Evangelist is taken from the ancient Seal of the Borough. The Book was placed on the Chief at the request of John Charles Ryle,
first Bishop 1880-1900. The Ship refers to the Port and Commerce of Liverpool.

Literature : Image from Wills's Arms of the Bishopric. Mccarthy: Armoria Sedium; E.E. Dorling: Heraldry of the Chruch a Handbook.