From Heraldry of the World
Your site history : Diocese of Los Angeles, California
Jump to navigation Jump to search 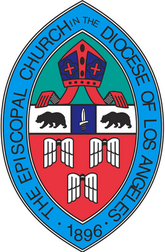 Sable, three double lures or, two and one, on a chief argent, on a pale purpure between two bears trippant sanguine, a sword in pale proper.

The Wings of Angles symbolises the City of Los Angeles. The Bears alludes to the State of California. The Sword is that of St Paul, to which the old Cathedral of the Dioces was dedicated.