From Heraldry of the World
Your site history : Diocese of Marquette
Jump to navigation Jump to search

Established : 1853 as Diocese of Saulte Sainte Marie-Marquette
Renamed Diocese of Marquette in 1937 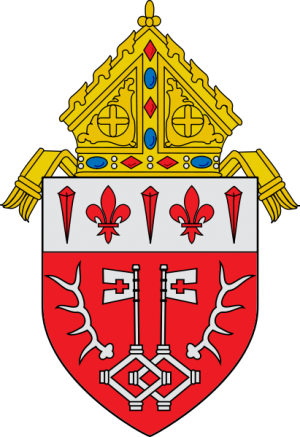 The keys are traditional for Saint Peter, the patron saint of the See and cathedral of Marquette. The deer antlers come from the arms of the state Michigan and are symbol for the wildlife in this state.

The two red fleurs-the-lys in the chief stand for the early French missionaries, especially father Marquette S.J. and Louis Joliet who came to spread the Faith in Michigan. The fleurs-de-lys are placed between three red Passion Nails, taken from the insignia of the Jesuits, who were responsable for the early evangelisation of the Upper Great Lakes.

Arms of Bishops of Marquette