From Heraldry of the World
Your site history : Diocese of Massachusetts
Jump to navigation Jump to search 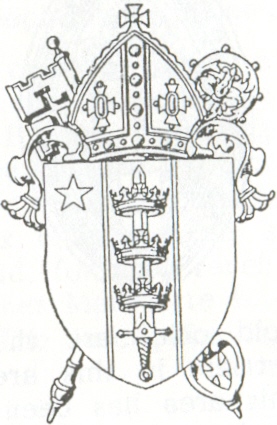 The Arms are on a blue shield a white star in dexter chief and on a red pale frimbriated silver a silver sword hilted gold piercing three golden coronets. The Star and the blue field are from the State Arms of Massachusetts. The Sword alludes to St Paul patron of the diocesean Cathedral. The Coronets alludes to the see City Boston, as it namesake in England has three coronets in its arms.