From Heraldry of the World
Your site history : Diocese of Memphis
Jump to navigation Jump to search 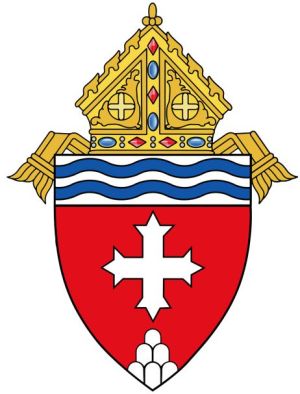 The six small hills in silver in base are based on the arms of Pope Paul VI, who established the diocese. They also refer to the mountains of Tennessee. The two wavy blue bands in chief represent the Mississippi and Tennessee rivers, the western and eastern (respectively) geographical borders of the diocese.

The colors red-white-blue are from the State flag of Tennessee.

The Coptic Cross refers to the ancient city of Memphis in Egypt, after which Memphis in Tennessee is named. The symbol links brothers and sisters in the faith of both regions to each other, and to the Church worldwide in the time of the new evangelization.

The cross was introduced by Bishop Steib. Previously the diocese used a pyramid as a symbol for Ancient Egypt.

Literature : background send to me by mail