From Heraldry of the World
Your site history : Diocese of Michigan
Jump to navigation Jump to search 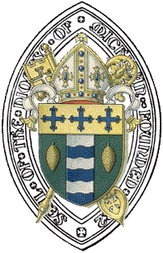 Vert, a pale barry wavy of sic argent and azure between two pinecones pendant proper; on a chief Or, three crossers fleury azure.

The Wavy Pile symbolises the Waters of the Great Lakes. The Pinecones indicates the Forests of the Area. The Crosses bule on a gold field are the French Royla Colours and alludes to the first European settlers of the Arear which where French. The Number Three also alludes to the three nations under which the area has been governed: France, England and the United States.