From Heraldry of the World
Your site history : Diocese of Nashville
Jump to navigation Jump to search 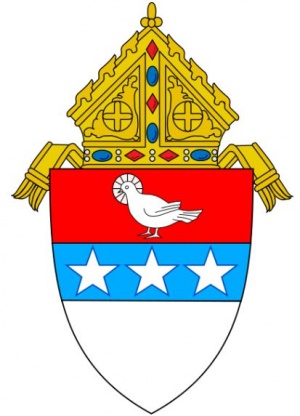 The arms were inspired by those of Pope Gregory XVI, the pope who erected the diocese. The dove is a symbol of the Holy Spirit and is also taken from the arms belonging to someone in the Nash family. The city is named for Francis Nash, one of the ten Continental Army and colonial militia generals killed in the American War of Independence.

The azure field and argent mullets are taken from and then differenced from the arms of Gregory XVI; the argent field is also from his arms. The azure and three mullets also represent the Blessed Virgin Mary, as well as the three Grand Divisions of the state of Tennessee, which was already divided into three when the diocese was created, the only diocese for the entire state at the time.

Literature : Background from the Dioces eof Nashville and Matthew Roth