From Heraldry of the World
Your site history : Diocese of North West Australia
Jump to navigation Jump to search 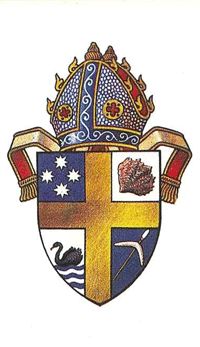 Quarterly Azure and Argent, a Cross Or between in the first quarter four Mullets of eight points also Argent, in the second quarter a Pearl Oyster Shell proper, in the third quarter on Water barry wavy in case proper a Black Swan naiant also proper, and in the fourth quarter an Aborigine's Spear in bend sinister shafted Gold headed Silver mounted of a Boomerang of the last.

The arms were officially granted on December 5, 1956.

If you have any information on these arms of North West Australia mail us !