From Heraldry of the World
Your site history : Diocese of Northern Michigan
Jump to navigation Jump to search 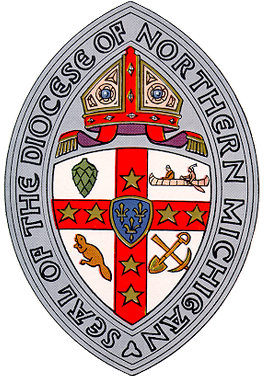 Azure, on a cross or between in 1st a pine cone or, in 2nd a indian and a trapper in a canoe or, in 3rd a beaver salient or, and in 4th a pickax and a spade in saltire reversed or, charged with seven mullets azure; surtout an enschuteon azure, three fleur-de-lis or, a border or.

The Red Cross symbolizes Anglican Heritage. The Pinecone alludes to the Lumber Industry and the Canoe symbolizes the French Voyageurs and thier influnce in the Area. The Beaver is a symbols of the fur trading industry and the pick and shovel for the Mining industry. The Stars symbolizes "The Seven Stars of the North".