From Heraldry of the World
Your site history : Diocese of Norwich
Jump to navigation Jump to search

Country : United Kingdom
Denomination : Anglican
Established : 630 as Diocese of Dunwich, translated to Elmham 673, to Thetford 1070 and to Norwich 1091. 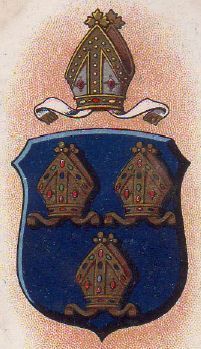 Azure, three mitres, two and one, Or.

The arms are first found on the seal of William Bateman (1341-57). The meaning is not fully clear. They may refer to the attributed arms of the royal house of East Anglia, but another explanation states that they may possibly represent the union in the See of Norwich of the Bishoprics of Thetford, Dunwich and Elmham in the 11th century.