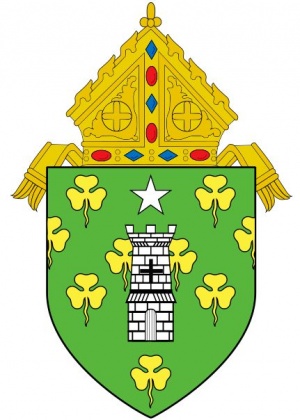 Vert, seme of trefoils or, a tower ensigned by a star argent

The green field strewn with golden trefoils, the heraldic appellation of a shamrock, honors St. Patrick, the titular of the Cathedral. The tower of a castle is the ancient signification of a town or village. Remains of Roman towers are still extant in the vicinity of Norwich, England. The present coat of arms of Norwich, England, displays a domed castle. Norwich, Connecticut, derived its name from this like-named town in England and was called Mohegan until 1662.

The prefix "Nor" (North) is symbolized by the North Star which is also a symbol of Oµr Lady as Stella Maris and Stella Matutina. Thus, Our Lady, who is already patroness of the United States, is also represented in the name of the Diocese.