From Heraldry of the World
Your site history : Diocese of Oklahoma
Jump to navigation Jump to search 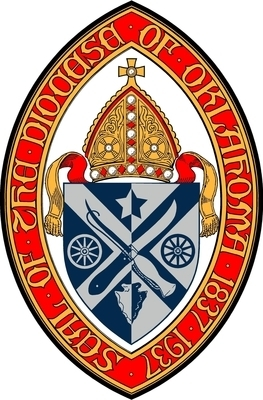 Per pale azure and argent, on a slatire between a mullet in the chief and an indian arrowhead in base, and two wagon wheels in fesse, a shoemaker's awl and leather knife per saltire , all counterchanged.

The Star is from the State Seal of Oklahoma and the Arrow head alludes to Oklahoma previously was named The Indian Territory. The Wagon Wheels alludes to the Cherokee run of 1893. the awl and knife is symbols of SS Cripin and Crispinian, near whose feast day, October 25th, most important changes in the Diocese has taken place.