From Heraldry of the World
Your site history : Diocese of Peoria
Jump to navigation Jump to search 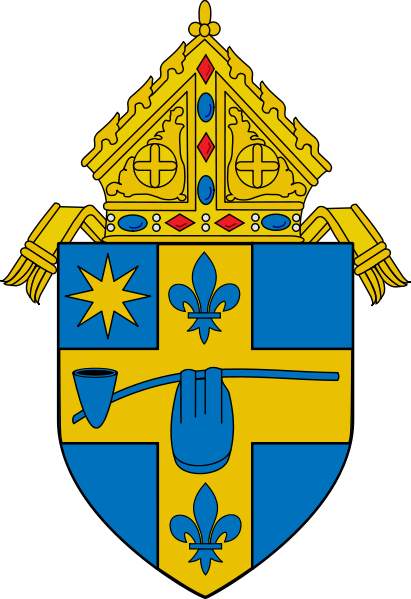 Azure, on a cross throughout and in the first quarter a mullet of eight points or, a calumet fesswise of the first between two fleurs-de-lis of the first in pale of the field.

The golden cross on blue and the two French fleur-de-lys honuor the French missionaries who brought the Faith tot the Indians in the Mississippi Valley. The are taken from the ancient Royal arms of France, before 1795. The two fleur-the-lys also commemorate the first missionary, Fr.Jacques Marquette and his companion Louis Joliette, who passed through the territory which is now the diocese of Peoria in Illinois.

The ´calumet´, the name given by the French to the Indian peace pipe, refers that the chief of the Peoria, a branch of the Illinois Indians, gave a calummet to Fr. Marquette. The golden star in chief is derived from the coat of arms of LaSalle who established Fort Creve Coeur across the river from Peoria in 1680.