From Heraldry of the World
Your site history : Diocese of Portsmouth (anglican)
Jump to navigation Jump to search 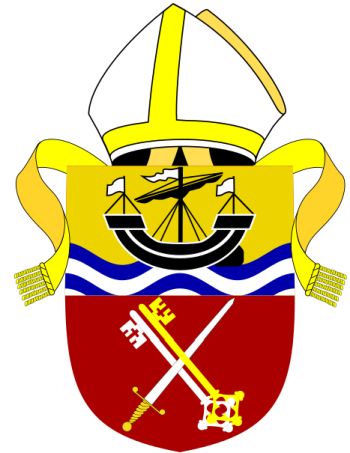 Per fesse Or and gu1es, in chief upon waves of the sea proper a lymphad sable, and in base two keys conjoined, wards outwards, in bend, the uppermost Or, the other argent, a sword interposed between them in bend sinister argent, pommel and hilt Or.

The diocese was constituted in 1927 out of the diocese of Winchester as a result of the growth of the town of Portsmouth and the relative isolation of the Isle of Wight from the city of Winchester.

These arms are a differenced version of those of the parent Diocese of Winchester, which are shown in the base of the shield. In chief appears a lymphad upon the sea, placed there to indicate the maritime importance of Portsmouth and the long-standing association of the town with the Royal Navy. It recalls such varied events as the Naval Reviews and the loss of the Royal George.