From Heraldry of the World
Your site history : Diocese of Rapid City
Jump to navigation Jump to search 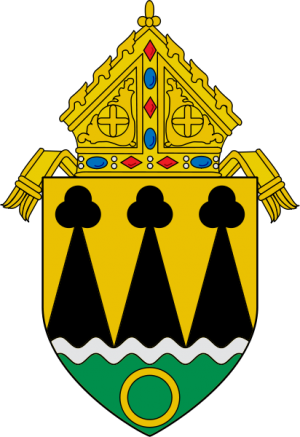 The three black peaks on gold represent the Black hills of South Dakota. They are depicted with shamrocks to allude to Saint-Patrick, patron saint of the church in Lead, which served as the first cathedral 1902-1930. The golden field reminds to the gold ore which once drew many propectors and settlers to the region.

During the reign of bishop Dimmerling or bishop this original shield has been changed: in base a green field with a golden annulet was added, separated to the gold by a barrulet wavy argent. The green recalls the rich ranch land on which many South Dakotans past and present have relied for their livelihood. It is charged with a golden circle reminiscent of the Sacred Circle of the Lakota people and their belief in the incorrectedness of all created things.

The white wavy stripe alludes to the River Missouri, the eastern boundary of the diocese.

Arms of Bishops of Lead

Arms of Bishops of Rapid City