From Heraldry of the World
Your site history : Diocese of Rockville Centre
Jump to navigation Jump to search 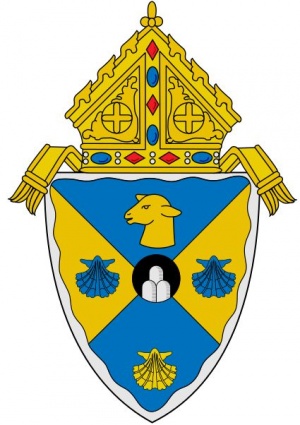 The four sections blue and gold per saltire represent the two counties Nassau and Suffolk which make up the territory of the diocese. In the upper centre is a lamb's head to honor the virginal innocence of Saint-Agnes, titular of the cathedral church in Rockville Centre. Gold and blue are also the historical colours of Nassau.

In the other three sections we see in alternating reversed colors three scallop shells. These shells pay particularly honor to the heritage of the thirteen tribes of Algonquin Indians that originally inhabited the area that is now Long Island and who employed the shells of the region in so may ways. The wavy silver border indicates that the diocese is an island and the centre of this design is a black roundel charged with three rocks argent, as taken from the arms of pope Pius XII who erected the diocese in 1957, indicating by play on words that the diocese is a ¨rock-ville centre¨.