From Heraldry of the World
Your site history : Diocese of Southwark
Jump to navigation Jump to search 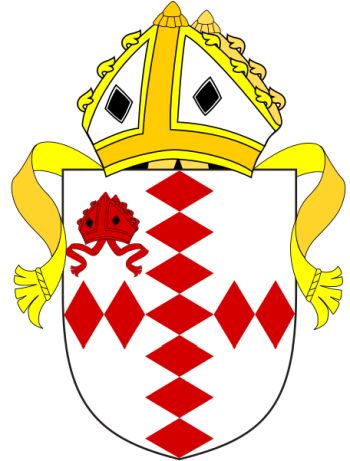 Argent, eleven fusils in cross conjoined, seven in pale fessewise, four in fesse palewise, and in the dexter chief a mitre all gules.

The diocese was erected under the Bishoprics of Southwark and Birmingham Act, 1904 to cater for the growth of South London. The see as erected consisted of the whole of the administrative county of London south of the Thames together with the Parliamentary divisions of East and Mid-Surrey. The Cathedral Church of St. Saviour was formerly attached to the Augustinian Priory of St. Mary Overy, receiving its present dedication when it became a parish church in 1540.

The arms are based upon those of the Priory of St. Mary Overy, which were Argent, a cross indented gules, in the dexter chief a cinquefoil of the last.